The Wonderful Weevil of Oz!

Last week, I was undecided about going to the Devon Bryophyte Group field meeting last Saturday at Brook Manor just outside Buckfastleigh seeing as I have a huge backlog of specimens to attend to and did not really fancy adding to it. That was until Nicola kindly asked me if I wanted to go and it turned out to be well worth going. Three healthy tubes full of samples (oh gawd) currently reside in the freezer awaiting initial processing but I focussed on an interesting weevil found by a small woodland stream lined with ferns. 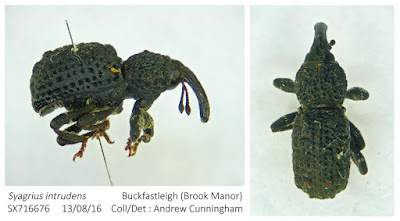 It proved quite a frustrating specimen to get a handle on. Several scans of the images in the hefty German weevil book drew a blank. I began to think it was a specimen that had lost the majority of it's scales and looked for similarly shaped specimens in said book in vain but somehow it prompted me to pick up Mike Morris' True Weevils (Part One) and it keyed out very easily to Syagrius intrudens.

This is an Australian species that is probably extinct there and is now only found in the UK thanks in likelihood to gardeners and their penchant for exotic ferns. Googling the internet for this species found a similar experience by Mark Telfer and Graeme Lyons here....... A non-native endemic!
Posted by Unknown at 11:41 No comments:

A Fly That Plays Bad Golf!

During a recent intense field week in sunny Kent with some wonderful members of the Dipterists Forum there were many superb flies recorded. One target species was found by Martin Drake at South Swale and Rob Wolton at Rushenden Marshes.

This was a Dolichopodidae fly species with superb legs sported by the male called Campsicnemus magicus. This species justifiably adorns the front cover of The Dipterists Handbook by Peter Chandler and I leave you with a couple of images of one of the specimens. 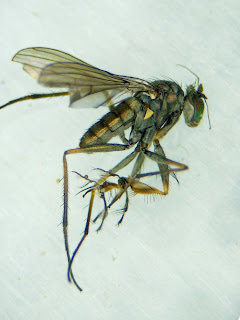 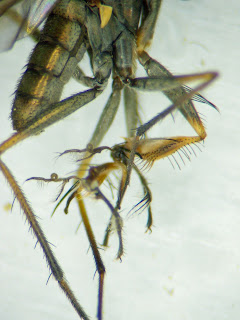 The Devon Fungi Group met up on Sunday at Deeper Marsh (Spitchwick Common) near Ashburton. As usual, I collected some invertebrates by way of the trusty sweep net. Whilst sorting the sample back home under the stereo microscope, I noticed a speck of dirt was not quite so. It was the tiniest rove beetle I had ever seen at just about 1.75mm long. 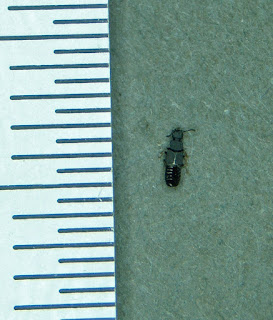 Out came the key to have a go at it and it wasn't easy seeing the fine detail required at 40x as optical quality degrades the higher you zoom in but I managed it. It is actually quite a common species, Anotylus tetracarinatus. Nice one. 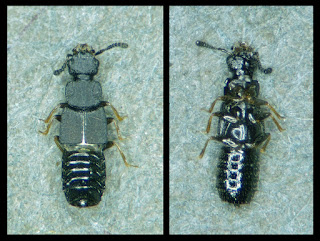 A few days ago, I noticed one of my well watched pots of leaves had a micro moth rapidly crawling all over inside. At first, it was simply a relief not to see a parasitic wasp as they are beyond my identification skills. Closer examination got me rather excited as it was a very smart moth and one that did not take long to determine. It was Phyllonorycter acerifoliella and it had emerged from a fold in the edge of a Field Maple leaf. Not bad for starting the lepidoptera records for the year with and a new one to boot. 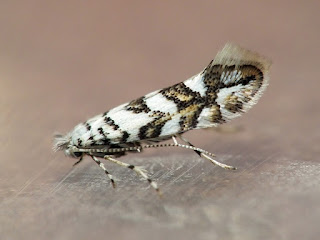 As previously mentioned, it was an image of Star-of-Bethlehem on the Dawlish Warren website that prompted a visit there. Having not had any luck finding the plant, I decided to explore Greenland Lake anyway for plants and invertebrates in sunny conditions and it proved to be productive with plenty seen as well as lots of images. Down on my hands and knees, I came across many smart Marram Weevils (Philopedon plagiatum) with quite a few dead examples missing their heads. Another species seen frequently in the sandy soil was Lesser Cockroach (Ectobius panzeri).

I turned my attention to the Tree Lupins to search for an alien aphid, Macrosiphum albifrons and selected a small low growing example to look at. A few more Marram Weevils were on and around the plant but there was another weevil that grabbed my attention, it was quite sizeable and had a lot of character. Many coleoptera will scuttle away, freeze, curl up or drop off a plant out of sight. Not this one, it raised itself high on it’s front legs and looked at me. It is large enough and sports well proportioned eyes to give the feeling of eye contact between yourself and the weevil. I was impressed with it’s body markings too, a light underside clearly demarcated from a dark upper side with a pale stripe on the top and a black stripe from nose to eye.

I took a few photographs to look at back home in comparison to Christoph Benisch‘s excellent online album of beetles of Germany. Very quickly, I thought it looked good for Sitona gressorius with the other option being S. griseus. Checking the British Checklist revealed that S. gressorius did not occur in Britain yet S. griseus did. I was still convinced that I had not seen S. griseus but I wondered if there was any other species to consider so I got in touch with Klaas Reißmann asking for his opinion. He was unambiguous in stating that if this was seen in Germany, it would be S. gressorius and that he also thought S. griseus is the only other species looking close but this was not it. The pulse was now quickening a bit as I passed this on to John Walters for a second opinion who in turn got Mark Telfer to look at it too. The response was exactly the same in that it looked good for S. gressorius which would be new for Britain and that it needed to be passed on to Max Barclay at the Natural History Museum as well as Mike Morris to get it confirmed. Mike was away but Max replied and things were set in motion. About a week later, I received an email from Max confirming that it was indeed Sitona gressorius and that it was a new species for Britain which put me on a high.

I had in that time been back to the Warren about four times to try and assess it’s distribution there. I kept finding it within seconds on the original plant I first discovered it. Each time bar one, I would find a few mating pairs which proved they were breeding there. They were all concentrated in one small area but I did find a small female type some way off on the dune ridge. I expect on a calm sunny day, I shall be able to have a better idea by finding more. Phil Chambers, the site manager was present one day and I explained this to him and there was amusement at the irony that there is a grant scheme in place to have the Lupinus removed from the site as a negative indicator species and this is supporting the thus far only known population of a species new to Britain. I jokingly, suggested they could get some more money to put the Lupinus back. The most I have found was during the largest search I carried out on the ninth of June in which nine examples were found including three pairs in copulation on the original host plant.

A translation of the species account in Die Rüsselkäfer Baden-Württembergs kindly provided by Klaas suggests S. gressorius prefers Lupinus but is not wholly dependent on it so the strategy of removing Tree Lupins may not jeopardise this newfound population. It also has a preference for warm sandy areas. Dawlish Warren is sandy all year if not warm! Another confidence boost is that it is occasionally reported in Germany to be a pest of Lupinus but of no economic importance so hopefully the Central Science Laboratory in York will not order the eradication of it to protect Grandma‘s precious lupins.

The European distribution ranges from south and central Europe up to Sweden in the north and is an introduced species first found in Germany in 1891 near Frankfurt. It is a well flying species yet it was the colonisation of Lupinus along railway lines that assisted it’s rapid spread early in the twentieth century. It was a great feeling to be studying a species new to Britain at leisure without the masses normally expected if this was a bird as the Long-billed Murrelet here a few years ago. An aborted Devonshire Association meeting to search for Noble Chafer due to heavy rain last weekend turned into a return visit to show this to Matt, Nicola, Una Garland and Kev Rylands who was on site. Despite bad weather, we found two males. A bonus came in the form of Suffocated Clover.

I am now about to write up an account for The Coleopterist magazine so I shall need to compose a more ‘scientific’ appearing account. I fancy submitting one to the BENHS too as it is a journal I enjoy. Maybe a picture for British Wildlife magazine to boot if they want one. 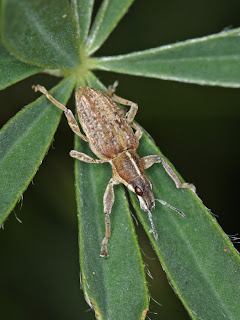